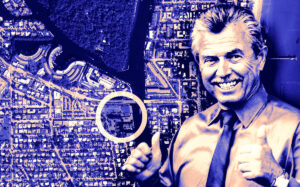 The Moshakos family’s LM Restaurants wants to open a waterfront dining and hotel venue next to an eatery it owns in Deerfield Beach.

LM Restaurants, through an affiliate, bought the 1.7-acre vacant development site at 1755 Southeast Third Court for $10 million from an entity led by Phillip Schuman, according to records. The property is just south of East Hillsboro Boulevard.

LM, which owns The Cove Waterfront Restaurant + Tiki Bar immediately south of the development site, envisions a casual restaurant and a boutique hotel on the property it purchased, according to Tom Prakas. This is a tentative proposal, as the Moshakos won’t embark on plans until early next year and could tweak plans.

Their South Florida venues include the waterfront Oceanic and Lucky Fish, which are adjacent to each other in Pompano Beach.

In October, Dania Beach commissioners approved negotiating an agreement with LM to redevelop the former Dania Beach Grill, closed since 2019, on the city-owned site at 65 North Beach Road. It would become Lucky Fish, Dania Beach.

Deerfield Beach has experienced some retail deals over the past year. Miami-based investor Ronny Finvarb, with Ark Restaurants as a minority member, bought the oceanfront JB’s on the Beach restaurant at 300 Northeast 21st Avenue, as well as a nearby parking lot, for $11 million in March of last year. A few months later, Finvarb bought the office-retail building with restaurants at 233-249 Northeast 21st Avenue in Deerfield Beach for $9.3 million.

James Batmasian’s Investments Limited, which he runs with his wife, Marta Batmasian, is considered among the biggest commercial property owners in Boca Raton, and has been betting on Deerfield Beach. This summer, the Batmasians bought the Lakes at Deerfield apartment complex at 1100 South Military Trail for $46 million, and the Walmart Neighborhood Market-anchored Palm Trails Plaza at 1101-1149 South Military Trail for $17 million.

Developers have also shown an appetite for restaurants elsewhere in South Florida. Robert Rivani’s Black Lion Investment Group has homed in on Miami Beach’s South of Fifth neighborhood, where he scooped up two properties with plans to lease them to restaurants.

In April, Black Lion paid $11.5 million for the building at 200 South Pointe Drive. In December, the company purchased the ground-floor commercial unit at the Marea residential condominium at 801 South Pointe Drive for $19 million.